Market analysts have released the first figures for the smartphone market in the first quarter of 2020, which is proving to be the worst quarter in the industry’s history. This reinforces fears of a new market crisis.

While Huawei consolidated its strong position in the crisis-stricken Chinese market in the first quarter of 2020, things are looking bad for all manufacturers globally.

The market research firm Strategy Analytics has published a report on global smartphone sales from January to March 2020.

According to this study, the industry sold 275 million units worldwide, a 17% drop in sales compared to the same quarter last year (330.4 million units sold) as you can see in the infographics below. 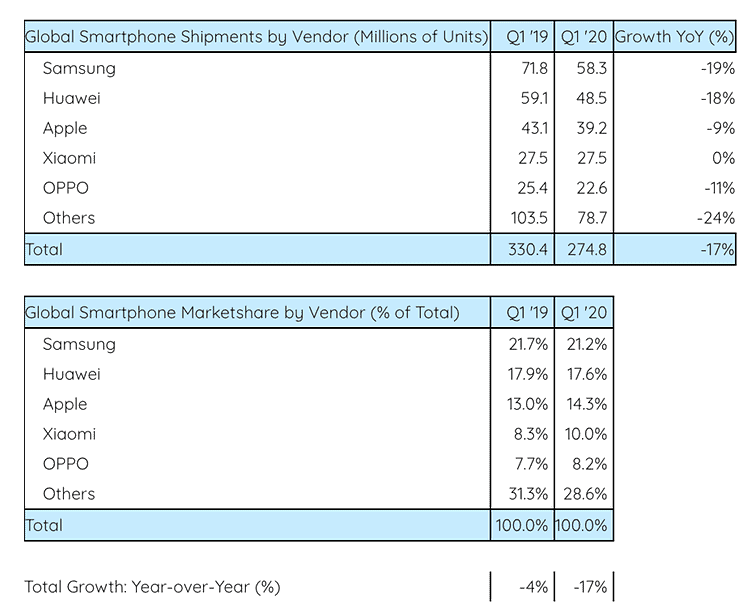 Declining Sales: Apple Never Falls Too Far From The Tree

Market leader Samsung sold approximately 58.3 million smartphones worldwide in the first quarter of 2020 compared to 71.8 million in 2019 over the same period (Q1 2020). A 19% drop and Samsung’s lowest sales in eight years, according to analysts.

Huawei is twice as affected worldwide. In addition to the ongoing litigation in the United States and the resulting mandatory abandonment of Google’s services, the crisis is causing losses.

According to the report, Huawei sold about 48.5 million smartphones in the first quarter of 2020, down 18 percent from the 59.1 million mobile phones sold in the same quarter last year.

A decline predicted by Huawei, which despite all this, remains in second place worldwide in terms of sales volume and market share, ahead of Apple and behind Samsung.

Impressive results that the Chinese giant owes in large part to its domination of the Chinese market.

At the bottom of the manufacturers’ podium, Apple is also recording a decline in sales.

However, Cuppertino is still keeping its head above water: while the Californian company sold around 43.1 million iPhones in the first quarter of 2019, the figures are down 9%, with 39.2 million units sold in Q1 2020.

At the same time, Apple’s market share fell from 14.3% to 13%. While Apple is therefore limiting the scrap, Xiaomi, on the other hand, is coming out of this crisis in a stronger position.

The manufacturer reached 10% market share in Q1 2020, compared to 8.3% last year at the same time. This is enough to consolidate its new high-end dynamics, which began with the Mi 10 Pro.

Xiaomi sold as many smartphones in the first quarter of 2020 as it did in 2019 over the same period, approximately 27.5 million units. Well, at least it’s not moving. But the future of the industry remains uncertain.

What is certain is that most manufacturers can once again count on the majority of their suppliers and thus on a resumption of their production lines, which were interrupted at the height of the Covid-19 containment.

However, investment in luxury goods is expected to decrease significantly in 2020 and in most markets. This could seriously halt the sales of flagship products.