A smartphone sold by Oppo exploded in the pocket of its owner in India. In the incident, the user was severely burned on both legs. Apparently, the phone’s battery suffers from a manufacturing defect.

An Oppo A53 suddenly exploded in the pocket of its owner, reports the YouTube channel Technical Dost. The incident occurred a few days ago in a small village in India.

The man says that the phone suddenly started to heat up for no apparent reason. It’s not uncommon for a smartphone to overheat if the components, including the SoC, are pushed to their limits, during a gaming session or a burst of photos, for example.

It is more rare, and more worrying, when a phone heats up when not in use. A few moments later, the device exploded before it could react.

Oppo A53 Explodes and Seriously Injured Its Owner

In the video posted by Technical Dost, visible below, the user can be seen with bandages on his legs, including his upper thighs and right ankle.

During the explosion, the flames emanating from the smartphone severely burned the user through his clothes.

In several photos shared in the footage, it is apparent that the phone charred and punctured his pants during the incident.

The victim explains that he always used the power supply and charging cable provided by Oppo in the box when he bought the phone.

It often happens that phone explosions are indeed caused by the use of a faulty third-party accessory.

In this case, it seems rather that it is the 5000 mAh battery of the smartphone that is the cause of the explosion. As we can see in the video, the outline of the battery melted.

Note that the phone was still under warranty. Oppo has not yet commented on the case at this time.

This is not the first time a phone has suddenly exploded for no apparent reason. Recently, an iPhone 6 exploded in its owner’s face. 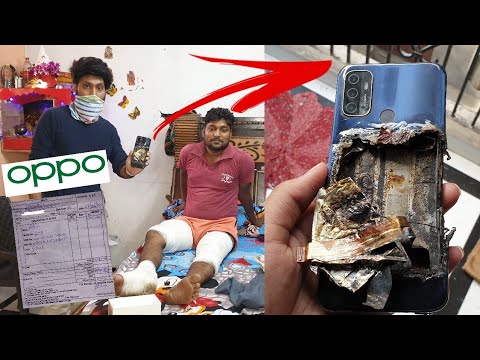