The iPhone 9 (SE 2) is revealed in pictures. Apple has obviously decided to take the design of the old iPhones to the letter. There are also thick borders around the screen, the return of the Touch ID fingerprint reader and a single photo sensor on the back. The smartphone nonetheless promises performance close to the iPhone 11 thanks to its A13 Bionic SoC. 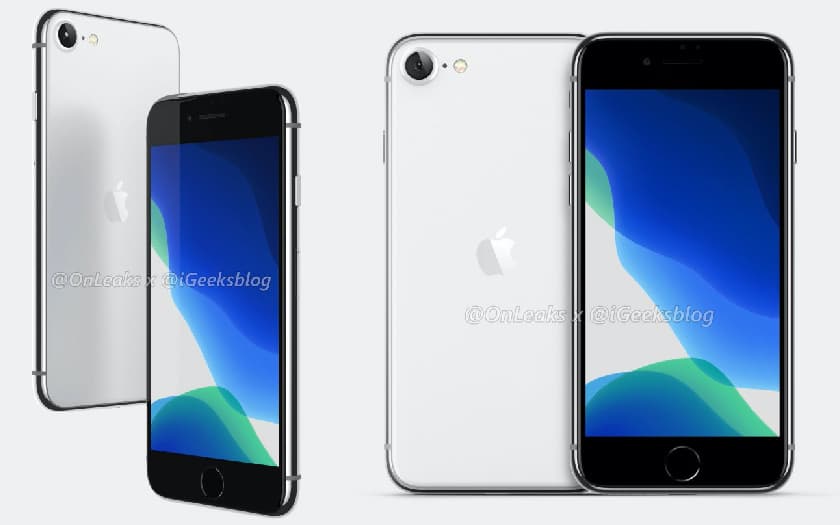 In partnership with our colleagues from iGeeksBlog, the leaker OnLeaks has posted detailed 3D renderings of the design of the iPhone SE2, renamed iPhone 9. To design these images, it was entirely based on the latest leaks that appeared on the web .

Oriented mid-range, the iPhone 9 would be built around a 4.7-inch LCD screen. Around this slab, we see large borders. The lower border houses the Touch ID reader, disappeared from high-end iPhone in favor of Face ID facial recognition. Above the slab, no notch: Apple is putting on a big black border intended for the selfie camera and the speakers.

On the back, there is a unique photo sensor and glass. The smartphone is therefore probably compatible with wireless charging. Very similar to the iPhone 8, the new Apple smartphone is nevertheless a little thicker than its predecessor (7.8 mm instead of 7.3 mm).

Data sheet side, it is distinguished by the integration of the Apple A13 Bionic SoC, the same component that powers the iPhone 11, iPhone 11 Pro and iPhone 11 Pro Max. It would be supported by 3 GB of RAM, according to a previous leak. For the moment, we are counting on a price of around € 500.

As a reminder, Apple should present the iPhone 9 in the month of March 2020. During the same keynote, the American manufacturer would also lift the veil on a new iPad Pro with triple photo sensor. What do you think of the iPhone 9 and its outdated design? Your opinion is awaited in the comments below.